Pirate Day is a national fundraising day encouraging kids and the young at heart to dress like pirates to raise money for childhood brain cancer research through The Kids’ Cancer Project and The Pirate Ship Foundation.

Participants all around the country are encouraged to host their filibuster fundraiser any time throughout the year. The collaborating charities usually push the boat out for Pirate Day in May however, due to the coronavirus pandemic this year, organisers chose to move the official day for 2020 to Thursday 24 September, which is also World Cancer Research Day.

Fundraisers can also double their impact this September and October as every dollar raised will be matched as part of The Kids’ Cancer Project Double Impact Appeal. That’s twice the science and double the hope for kids with brain cancer.

Now in its sixth year, Pirate Day has become a national favourite but the concept was conceived in tragic circumstances when in 2014 Nathan Colgan of Perth, learned his son, Conor (then five-years-old), had an aggressive brain tumour

“The more I read up on the disease, the more heartbroken I became,” the distraught dad shared.

“I discovered that for every two children diagnosed with a brain tumour, one will sadly lose their life. And the ones that do survive often have severe, lasting side effects. The only way to change this is to put more funding into scientific research,” said Nathan.

By donning an eye patch and making a donation, every Australian can make a serious difference.

Last year more than 300 schools and early learning centres, along with workplaces and rum bars got behind the cause.

Since Pirate Day started in 2015, more than $300,000 has been raised for scientific studies to find kinder, more effective treatments for the disease that tragically claims the lives of more children in Australia than any other. 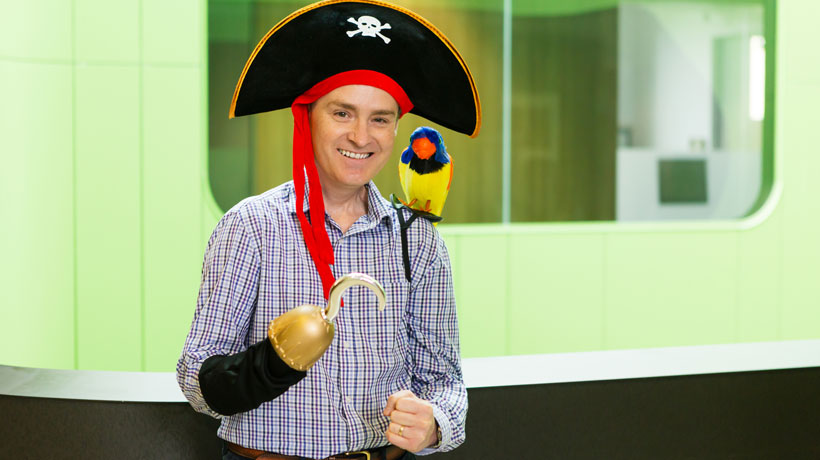 Where the money raised goes

In 2020, funds will be directed specifically to a study lead by Associate Professor Joshua McCarroll, Team Leader of the Gene Therapeutics and Drug Delivery group at Children’s Cancer Institute and the Australian Centre for NanoMedicine, UNSW.

Col Reynolds OAM, founder of The Kids’ Cancer Project is delighted with the initiative.

“It’s great to have a bit of fun to fundraise despite the serious nature of kids’ cancer. Many people aren’t aware that the causes of childhood cancer are unknown, that there is no prevention and that research is the only way to improve treatments and survival,” he said.

“It is only through research that my son Conor, who is now ten, has defied the odds and is still with us today,” said Nathan. “I wish I could say he has been cured of his illness but sadly his fight against cancer is not yet over and neither is mine.”

“Our journey continues, but with the support of every Australian who takes part in Pirate Day, we have the courage to keep going,” Nathan said.

Be the first one to hear our latest announcements, directly on your email. Subscribe today and we will keep you up to date!